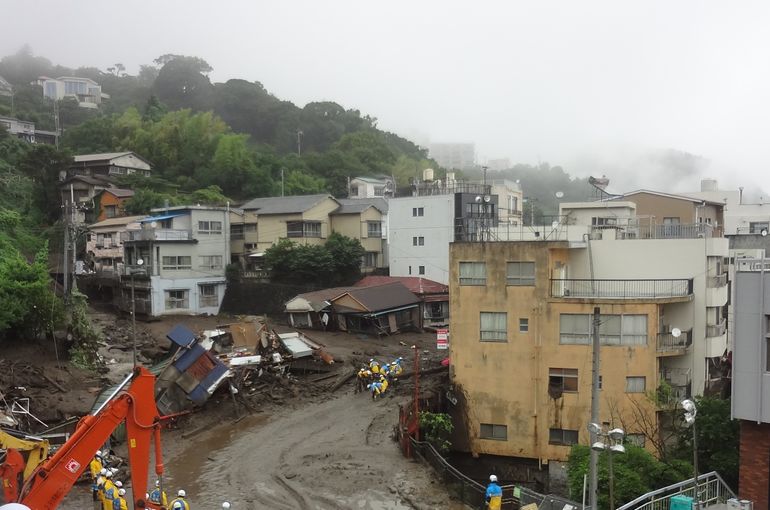 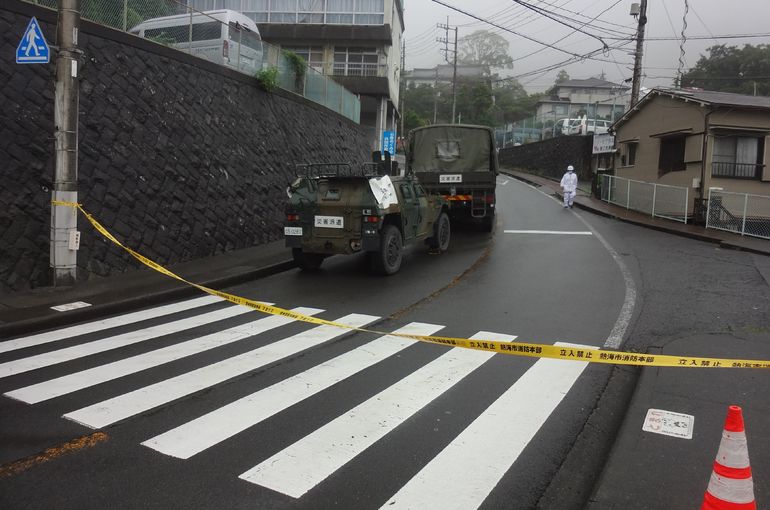 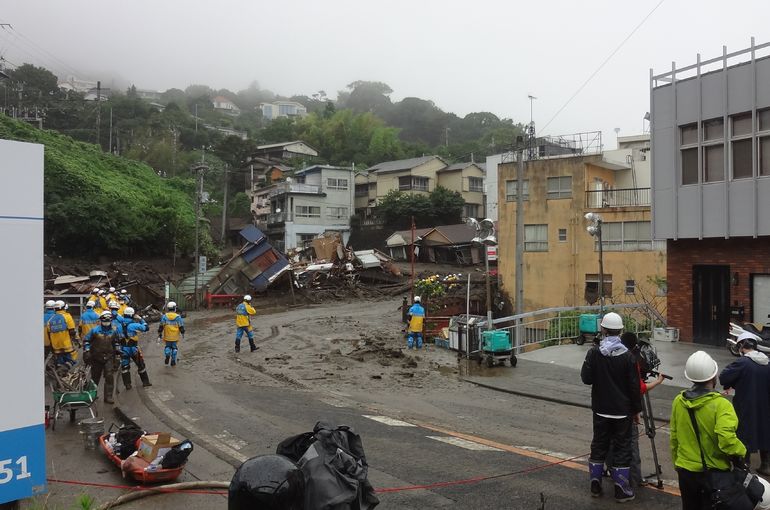 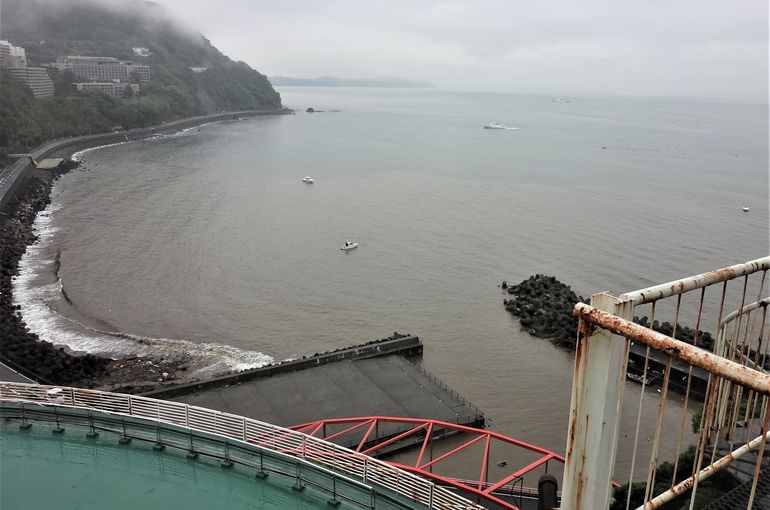 Day 1 of searching for missing debris flow in Atami

Yesterday, a debris flow occurred in the Izusan area of Atami. Specifically, it occurred in a small river called Aizengawa. Atami is nearby, but I didn't know much about the Izusan area. Izusan is a side road between Yugawara and Atami on Route 135. Therefore, I thought that "Izusan" was a small area in the mountains. However, the area called "Izusan area" was very large and extended to the vicinity of Atami station. Recently, it is talked about that Atami has revived as a tourist destination. Mainly after exiting the ticket gate, there is a shopping street on the right side, and this side is the base for sightseeing in Atami. The Izusan area is on the left side of the ticket gate, over the bus terminal and heading for the mountain. In my personal memory, the "Izusan district" was a district with a lot of forests and few people lived there. Looking at the damage caused by the debris flow this time, I was surprised to find that there were quite a lot of residences. So I went to the site today. Ai Hatsukawa is about a 15-minute walk from Atami Station.

I couldn't go to the search site around the mountains.

First, I went to Ai Hatsukawa around the mountain. On the way, I saw many taxis and Shizuoka Prefectural Police cars. Upon arriving at the scene, the SDF car dispatched to the disaster was also parked. There was a restricted line that was off limits, and I couldn't reach the site around the mountains. However, I could see a muddy vacant lot and a partially collapsed house, whether it was due to the debris flow or simply the soil flowing into the vacant lot. I could see a part of the collapsed building in the forest. At first glance, no search work was being carried out around the top of the mountain. The search around here may be over.

We approached the restoration site on National Highway 135.

Next, I proceeded along National Route 135 to the search site. After all, the cars of the Self-Defense Forces and the Shizuoka Prefectural Police were stopped. This time I was able to reach the search site. Many workers were engaged in restoration work. I couldn't see the Ai Hatsukawa directly, but the sound of the flowing water was loud and aroused my anxiety. Many media people gathered and I saw 3-4 TV cameras. There are more than 20 missing people, so I hope you will find them quickly.

The coast was covered with muddy water.

When I looked at the beach, I found brown and muddy water. As for the search on the sea, there were several ships and one helicopter, and the search was conducted from the sea and the sky. The aerial drone didn't seem to be in use. After all, the harsh weather conditions and the short flight time may be the bottleneck. The first victim was found at sea. After all, there may be many people who have been washed away to the sea by the momentum of the debris flow. I would like you to use an underwater drone for underwater searches. Today, a corpse has been found on the beach in Manazuru. We cannot conclude that the victim was a debris flow in Atami, but I would like you to actively search the sea.
Underwater drones, unlike aerial drones, can operate for several hours. In addition, some models can be equipped with active sonar, so it is possible to check the terrain and sediment to some extent even if it is cloudy. By all means, I sincerely hope that you will use the underwater drone for underwater search.